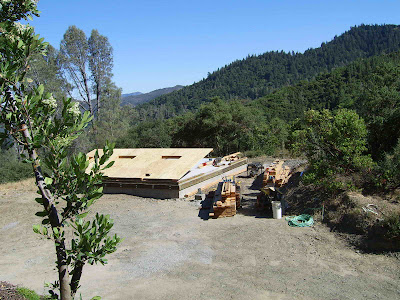 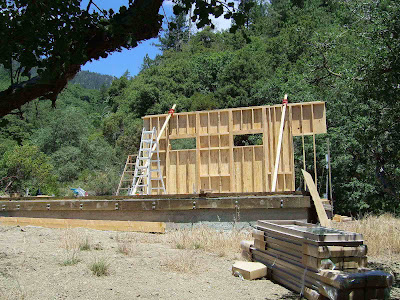 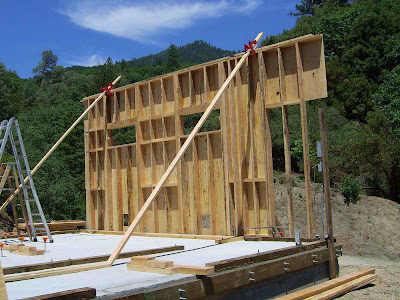 One person can build and raise a wall by himself, as shown here. First, the framing is done flat on the deck, and plywood sheathing added. Then using an auto bumper jack, the wall is lifted about 2 ft as shown in the top photo, enough to set two wall jacks under the edge. (The wall jacks are the two red colored pieces of hardware, and they ride on 2x4s.) Next, using a piece of pipe for a handle (not shown) you would jack up one side about a foot, then move to the other side and raise that about 2 ft, and continuing to alternate side to side until fully vertical. Voila!
*
However, DANGER! In the case in these photos, I was exceeding the design specs for the jacks, both height-wise (the jacks are made for 8-9-10ft walls and this was 12ft high) and weight-wise (the wall was 26ft long and the framing was 2x6 and 4x6, quite a bit heavier than 2x4 framing). All the weight is riding on 18ft long 2x4s! And they were bending like pole vault poles. And when the wall is half way up (45deg.), you are working on ladders directly underneath the wall. If one of the 2x4s has a knot or unseen flaw, and if it suddenly snaps, you would be one flattened body. Thank Heaven, Lucky Stars, God, Coyote, and Buddha that I'm alive (knock on wood). Made me think of other "lucky" occasions, like falling asleep at the wheel going 65MPH into an oak tree, statistically a 90% fatality rate.
Posted by Unknown at 2:16 PM