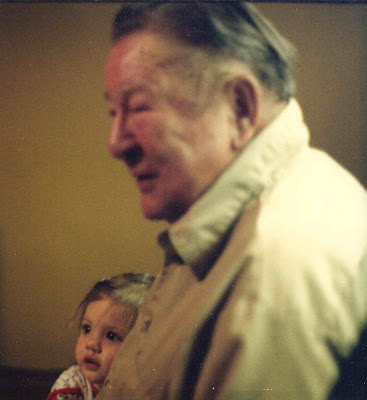 This is my real father and my real daughter. 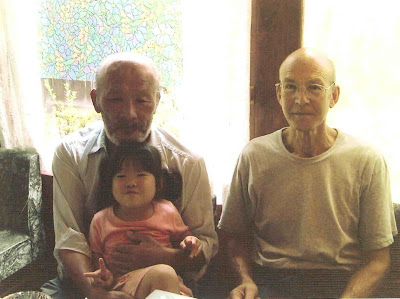 This is my adopted father and my adopted niece (both informally). Everybody calls him "The Boss" (shacho), but he has me call him Honorable Father (o-tou-san). He is The Boss in the sense that nobody messes with him, and though he is not yakuza himself, he has tatooed yakuza working for him.

At Sekizan he has been designing (along with Gozen-sama) and constructing the temple gardens for over 25 years, to the point where the moss hillocks and autumn maples have become a major tourist attraction. This photo was taken just a week before I returned to the US after 5+ years in Japan, and I said to Shacho, "You're almost finished with the gardens, right?" to which he replied, "No, only half done." 25 years! He would supervise a crew of 4 or 5 of us temple priests along with 2 or 3 of his own men in whatever heavy work needed to be done at Sekizan. Then he would buy lunch for everybody at this nearby cafe, where I was known as "A.B.C.O.G" which makes perfect sense in Japanese: Uncle ABC (oji=uncle) because during the time the girl's grandmother was preparing the food, I would teach her English, starting with the ABC song.
Posted by Unknown at 11:17 PM