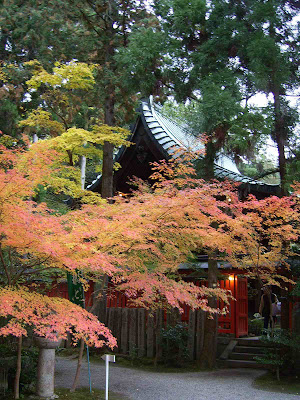 Dengyo Daishi was unable in his lifetime to bring the full Mantrayana teachings to his disciples, so he entrusted this task to the young Ennin (posthumous name Jikaku Daishi). Years later, Ennin made an historic 10 year pilgrimmage in China, including Mt Wu-tai and the capitol city Chang-an where he acquired the Mantrayana under several Indian and Chinese masters. But this pilgrimage could not possibly have succeeded in overcoming almost insurmountable Chinese bureaucratic roadblocks were it not for the intercession of a Korean Lotus Sutra temple. In gratitude to the Koreans on Sekizan ("red mt") in China, Ennin had the Sekizan diety enshrined at the foot of Mt Hiei, Japan.