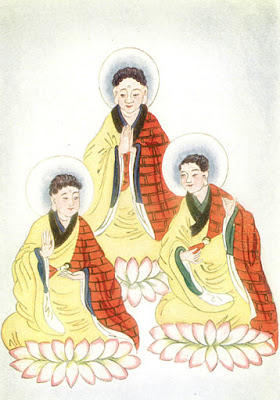 Depictions of a Buddha and his two chief assistants has historical precedence in Shariputra and Maudgalyayana, who were spiritual friends before meeting Shakyamuni, realizing arhatship, and being declared "Shakyamuni's Two Generals." Shariputra was distinguished by 'excellence in wisdom,' while Maudgalyayana was 'chief in spiritual powers.'
*
In the Mahayana, Shakyamuni takes his universal form as Mahavairocana Buddha, and his two chief assistants become the bodhisattvas Manjushri (Prince of the Dharma) and Samantabhadra (Universal Virtue, or The All-Good Bodhisattva). And parallel to the historical chief disciples, Manjushri, shown riding on a lion, proclaims the Dharma with a lion's roar, while Samantabhadra, riding on an elephant, leads people in the strong and steadfast practice of the various forms of concentration.
*
In this evolution of Buddhism, Shariputra began to represent the WORDS of the teaching only as the religion aged and became somewhat ossified, and so, the expanded (vaipulya) teachings were revealed by Manjushri, being inspired by his direct inner knowledge. Likewise Samantabhadra shows the inspired practices which meet the needs of the world's various cultures in present time, even though they are different from 400BC India.
*
Other triads are Amitabha Buddha flanked by the bodhisattvas Avalokiteshvara (compassion) and Mahastamapraptha (power), and Fudo Myo-o assisted by two boys, one emphasizing the sword aspect and the other emphasizing the rope aspect.
Posted by Unknown at 11:33 PM